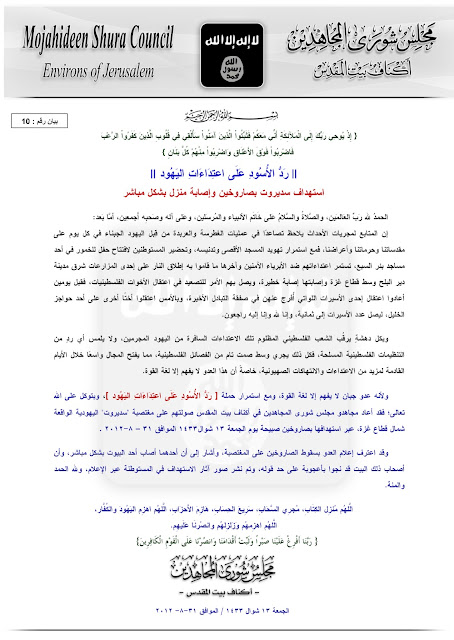 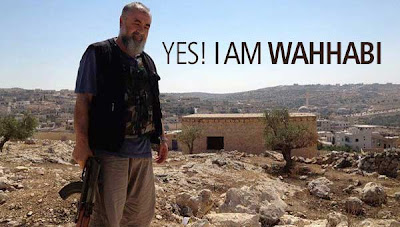 Despite my resistance to new labels which separate Muslims and do not unite them… I must announce openly and clearly – without any biasness or partisanship: That I am a Wahhabist, amongst those who love Shaykh Muhammad ibn ‘Abdil-Wahhāb (may Allāh have mercy upon him) and his Da’wah.

If Wahhabism means Da’wah (Calling) to Tawhīd (Pure Monotheism)… and to the correct ‘Aqīdah (creed)… and abandoning shirk and Barā’ah (disassociating) from it and its people… as the Da’wah of the Shaykh was… Then, yes! I am a Wahhabist!

If Wahhabism means Da’wah to the Qur’ān and Sunnah… and holding on to the foundations, guidance, and understanding of As-Salaf As-Sālih (the Pious Predecessors)… and forsaking biasness towards a Math’hab… as the Da’wah of the Shaykh was… Then, yes! I am a Wahhabist!

If Wahhabism means waging Jihād (Holy War) against the oppressive Tawāghīt (false governments which have claimed to be gods)… and to wage Jihād against shirk and the pagans… as the Da’wah of the Shaykh was… Then, yes! I am a Wahhabist!

If Wahhabism means the middle-path… not leaning towards extremism nor deficiency… as the Da’wah of the Shaykh was… Then, yes! I am a Wahhabist!

Indeed I have pondered over the situation of those who attack the Shaykh and his Da’wah, and I found them to be:

a) Either a kāfir (infidel, disbeliever)
b) Or a Shī’ī, Rāfidhī
c) Or an extremist Sūfī
d) Or a deviant heretic
e) Or a jāhil (ignorant) who repeats what he hears without knowing anything regarding the Shaykh and his Da’wah

And this is an evil wretchedness… destroyed is the one who is satisfied of standing there (against the Da’wah of Tawhīd), or being from the numbers of those people… or even merely increases their numbers by anything whatsoever!

Why are they attacking the Shaykh… and indeed how many are these attackers in this era… We have been hearing for a while now from these types of people which were just mentioned… slandering, sensationalizing, and reviling the Shaykh and his Da’wah… till such a point, that the terms, “Wahhabist” and “Wahhabism” have become curse words and insults in the usage of many people! Without them even bringing a single, small, authentic evidence which would justify all those oppressions, revilement, and curses… and hatred!?

Here are the sayings of the Shaykh, and his writings in between our hands in front of us… easy to reach for whosoever wants… all of it speaks the truth, and calls to the truth, and commands the truth… Bring us one mistake which contradicts the Qur’ān or Sunnah which is directly from the Shaykh and his Da’wah- which would justify all your hatred, abuse, and sensationalism … If you are indeed truthful!

But if you cannot find anything – and you can never find anything – Then we will know that the reason for which you abused the Shaykh and his Da’wah, was due to what he was upon of the truth which did not please you nor did it please your Tawāghīt and your Shayātīn!

And if it is said: “Look at the oppression and mistakes of those who ascribe themselves to the Shaykh and his Da’wah these days!”

This entry was posted in Abu Basir al-Tartusi, Muslim Affairs and tagged salafi, wahhabi on August 29, 2012. 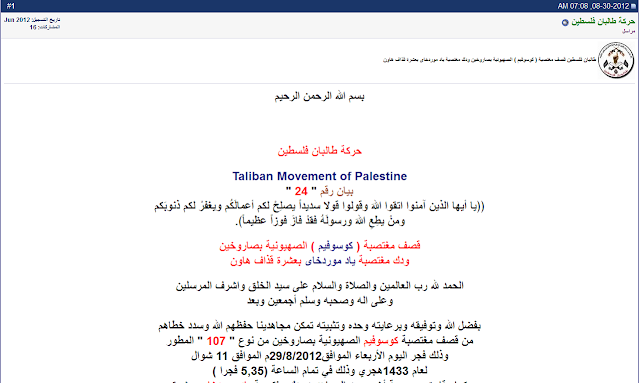 On July 22, members of the group which is lately active in Sinai Peninsula, "Ansar Beit al-Makdis" (Supporters of Jerusalem) opened fire on an Israeli military bus full of soldiers next to the southern border[1]. On July 24 the group published a video on the web[2] shows the attack on the gas pipeline in Sinai. On August 14, two Grad missiles launched from Sinai towards Israel's southern city Eilat.

Yesterday, on August 25, the group published two videos shows the last attacks I mentioned above. Both videos uploaded by a guy named "Za'In" (or as he call himself, "Irahabi" i.e. "terrorist") to his Facebook account[3] and his YouTube account, which he is running under the name "Ansar al-Sharia al-Sharkia" (Supporters of the Eastern Sharia)[4].

Za'In is a family member of Izaz Ul Haq[6], Saudi (from Jedda) and Izaz's cousin, as mentioned in his Facebook account, is Attal Zalmay[7], Saudi as well. As it seems, Zalmay is taking part in the Jihad in Pakistan-Afghanistan. According to their Facebook accounts, the three of them are supporters of the Jihad against Israel and "the enemies of Islam".

As we know, one of the groups claimed responsibility for some of the terror attacks against southern Israeli border is a group that affiliated with Al-Qaeda and the Salafi-jihadi stream and active in Sinai Peninsula under the name "Majles Shura al-Mujaheedin fi Aknaf Beit alMakdis" (Shura council in the environs of Jerusalem). In one occasion, on June 18th 2012[8], the group sent two terrorists, one from Saudi Arabia and the other from Egypt, to strike the Israeli Defense Forces. Eventually they murdered an Israeli Arab citizen from Haifa, named Saeed Peshapsha.

As it seems, the three "cousins" have a lot to do with the Jihadi-Salafi stream in Egypt, in Saudi Arabia (which is the source of fanatical militant Islamic point of view) and in other places, and might have a connection to the "Ansar Beit al-Makdis" group. As we can notice, they are not afraid to show it.

In both videos, the main focus is placed on a hadith of the Prophet Muhammad. According to the hadith, the fight around the area that one time with al-Hind, described a greater merit than the struggle to other areas. Al-Hind encompassed the present-day Pakistan, Kashmir, India, Nepal, Bhutan, Bangladesh, Sri Lanka and the Maledieven.Thus, it can be well attract new recruits for jihad in Pakistan. 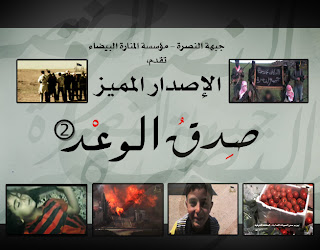 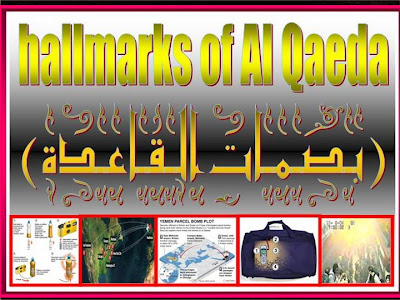 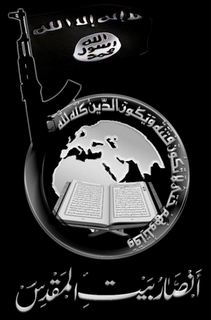 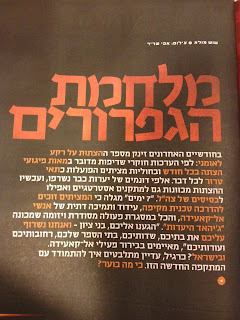